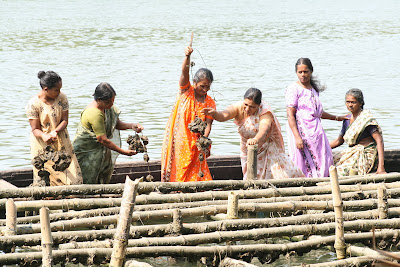 Oyster farms, in Satara Island, near Kochi, are becoming a financially-viable alternative for the local people. It helps that there is an abundance of oysters in the area

On the Munambam river there are several bamboos, tied in a crisscross manner, and embedded in the soil. When you approach it on an inflatable rubber dingy, you see many polythene strings tied around the poles and submerged in the water. T.R. Rakesh lifts up one string. There are several oysters clinging to each other.

“On each string, there are 40 oysters,” says Rakesh, a senior research fellow of the National Agricultural Innovation Project (NAIP), a World Bank-aided scheme, implemented by the Central Marine Fisheries Research Institute (CMFRI). “In this oyster farm, there are 1500 oysters in various stages of growth.”

Sometimes, oysters are grown singly, so that there is a good cup shape to it. “Hotels like these type of oysters,” says Rakesh. He takes a knife and opens a shell. Then he presses the meat and says, “It has not reached full maturity.”

Alongside the banks of Satara Island, 42 kms from Kochi, there are numerous such farms. “Earlier, the people would just pick up the oysters from under the rocks, near their homes, and sell it locally,” says Dr. K. Sunil Mohamed, a Principal Scientist of the CMFRI. “The quality was not as good, as those grown on the farms.”

It was in 2003 that the CMFRI first set up a demonstration farm on the island. “The first harvest was bountiful and the people were convinced,” says Mohamed. Now there are more than 40 farms growing oysters.

One such farmer is Jayashree Sanadanan. She says that ever since the awareness of eating oysters has spread, thanks to the CMFRI, they are getting a good price. “Nowadays, I sell a kilo for Rs 350,” she says. Jayashree's output is about 50 kgs per season, which lasts from December to May. But it is not easy to work with oysters. “They have sharp edges, so our hands get cut often,” she says. “I use gloves to minimise the injuries.”

Jenny Sharma, a Technical Officer of the Molluscan Fisheries Division of the CMFRI, says that five-star hotels like the Casino Group are buying 150 oysters a week at Rs 5 per piece. “The Taj Malabar is also buying oysters regularly,” she says. “There is a growing acceptance of oysters as a dish.”

To ensure that the oysters are not harmful to eat, there is a regular testing of the waters by the CMFRI. “We follow European Union guidelines,” says Mohamed. “However, because the Arabian Sea is less than one kilometre away, the salinity of the water is high, which is suitable for the breeding of oysters.”

Nevertheless, precautions are being taken. There is a Value Added Product unit on the island. After the oysters are taken out of the water, jets of water are aimed at them, to remove the mud sticking to the shells. Then it is put into a depuration tank, where sterilised sea-water enables the oysters to be cleansed of all dirt and other impurities. “Later, it is put in hot water for two minutes,” says P.S. Alloycious, a technical assistant of CMFRI. “Immediately, the shells open out and the meat is taken out.

The nectar is also collected and is used to make a soup. “With the meat, you can make pickles and curries,” says Alloycious. These products are developed by the CMFRI in collaboration with the National Institute of Fisheries Post Harvest Technology and Training and sold under the brand name of 'Muziris' oysters.

As word spreads that the farmers are getting a good price for oysters, more and more people are opting to start farms. “This will enable many families to have a good income,” says Mohamed.