The stirrings of a hazy new dawn 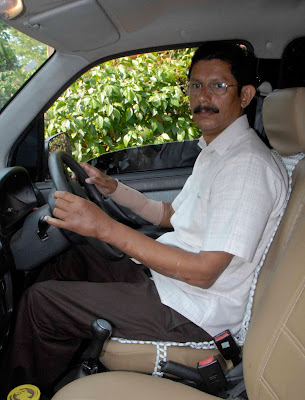 Fundamentalists in Kerala hacked off Prof. T. J. Joseph's hand for using the name of Mohammad in a question paper. Nine months later, as he struggles with financial woes, the professor underwent surgery on his hand

On March 23, Prof. T.J. Joseph had a surgery on his hand at the Specialists’ Hospital at Kochi. Says Dr. R Jeyakumar, the head of the department of plastic, microvascular, and cosmetic surgery: “Since he had multiple fractures on his hand, it had to be immobilised longer than usual. Hence, the joint at the knuckles became stiff. So, an operation was done to relax the stiffness of the knuckles.”

Joseph also had to undergo ‘neurolysis’ – the release of the nerves under microscope. This had to be done as the nerves had been cut in multiple places. “He is progressing well,” says Jeyakumar.

Joseph has returned to the same situation nine months ago of being unable to use his hands. This happened when fundamentalists had hacked off his right hand and damaged the left, because he named a lunatic as Mohammad in a Malayalam question paper in Newman College, Thodupuzha. Since he can no longer use his hands, his wife, Salomi, and his sister, the nun, Stella, are helping Joseph to eat his food and change his clothes.

Meanwhile, before the operation, for the physiotherapy sessions, at the Specialists' Hospital unit at Palarivattom, Kochi, amazingly, he drove the car all the way from Muvattupuzha. “I used the two fingers of my left hand, to change the gears,” he says. “Since my right leg is okay, I could use the clutch and the accelerator. But I was unable to use my right arm. So I let it rest on the steering wheel.” Joseph says he can no longer afford the Rs 1000 it will cost him to come by taxi. The professor has financial problems.

On September 1, last year, Newman College had sacked him for “hurting the sentiments of the Muslim community.” Joseph appealed to the management, but it was unmoved. The case is going on in the Appellate Tribunal of the Mahatma Gandhi University “I am living on the donations I have received so far,” he says.

This support has buoyed his spirits. “I get many letters from Hindus, Muslims, and Christians,” he says. “They offer their encouragement and say that they are with me always. Where ever I have gone, the people are happy to see me. They say that they have been praying for me. They are glad to see that I am alive and well.”

Sr. Stella, who has lived abroad for more than twenty years, says, “The secular spirit is very strong in our country. The ordinary people show love and respect to the members of all religions. It is this generosity of heart that makes India such a great country.”

Since he is an avid reader, Joseph has been gifted plenty of books by well-wishers. “More than seventy so far,” he says, with a smile. “It is a mix of fiction and non-fiction.”

Interestingly, in all these months, Joseph did not go through any nightmares or depressing moments. “All of us – my wife, son, daughter, and sister – keep talking about the event,” he says. “That has proved to be a healing experience.” The family has treated the event as a God-sent warning. “It is because of this act that the people of Kerala have realised the dangers of terrorism,” he says. “Civil society has to stand together to fight this problem.”