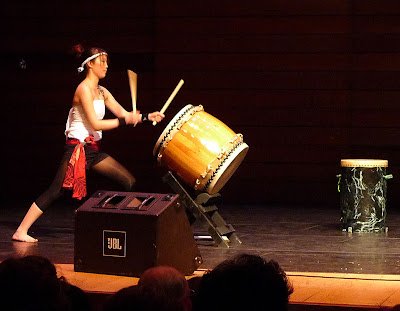 Japanese performers played on ancient drums, known as the taiko, for the first time in India, and mesmerised an audience in Kochi

The drums catch the eye. One is big and round, like a truck wheel. The others are of smaller shape. They are placed on wooden holders. The performers, both men and women, are wearing black and red kimono tops and black trousers, along with headbands. They stand poised in front of the drums, their legs apart, their drumsticks held firmly in their hands.

Then the leader, Shinko Sibasaki, mutters something in Japanese. Immediately, they attack the drums with swift movements of their arms. The sound reaches a crescendo, and then there is a pause. The drummers remain immovable. Then after a few moments, they hit the drums, but in a slower tempo.

Shinko, 66, who will complete sixty years of public performance next year, hits the edges and the sides of the drum.

“This is the first time we have seen that you can hit all the sides of a drum, and the sound remains impressive,” says Balan M Nair, the president of the Alumni Society of the Association for Overseas Technical Scholarship, (AOTS) Kerala, which arranged this programme. The AOTS is affiliated to the Ministry of Economy, Trade and Industry in Japan.

Kazuo Shibasaki, a petite young woman, brings out a cymbal and uses a long metallic stick to hit it in a rhythmic manner. Meanwhile, the other players switch from drum to drum. Two of them stand on either side of the big drum and hit it with a hypnotic co-ordination even though they cannot see each other.

The sound reverberates through the hall of the Lotus Club in Kochi. It is like hearing a louder version of your heartbeat. “This is a traditional Japanese sound,” says P.K. Nagma, the Kozhikode-based interpreter, who is accompanying the drummers on their Kerala tour.

This drum recital, known as Taiko, has its origins hundreds of years ago. Incidentally, 'taiko' means drums in Japanese. The first group was established during the Meiji era (1868-1912). Shinko belongs to the Miyabi Daiko troupe, which has 1.2 lakh members in Japan. “We have performed in 89 countries,” he says.

During the show, Yasuko Tomisava, a female drummer, goes to the side and dons a lion's mask with a long, red mane. Then she steps down from the stage and dances along the aisle.

“If the lion tries to bite your head off, that means, you will have a lot of intelligence,” says Yasuko. “If it tries to bite your hands, and if there is any problem with the hand, it will be healed. The same is the case with the leg. The lion brings luck and prosperity.”

And so the audience watches with a mix of awe and caution as Yasuko approaches them. Some laugh when she touches them. Others touch her back. As she moves around, her colleagues continue to play.

Essentially, each item starts slowly, builds up in tempo and reaches a crescendo. It is physically tiring, because when members of the audience are invited to hit the drums, during a riveting segment, it does not take long for them to feel breathless. At the end of the performance, all the drummers are also perspiring profusely.

When asked how the audience in Kerala differed from those in other countries, Shinko says, “The people have a great affinity to festivals. That is why there was such a strong encouragement and support during our performance. An added bonus was the homely atmosphere.”