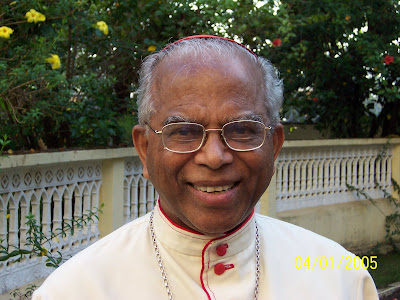 A reminiscence of the late Varkey Cardinal Vithayathil, who died on April 1

On September, 2009, Varkey Cardinal Vithayathil was a guest of honour at an annual meet of the Vithayathils. His brothers and sisters, along with their children were present. The function was held at the family house next to the Pastoral Orientation Centre in Palarivattom, Kochi.

Wearing a cream coloured cassock with the red sash tied around the waist, the Cardinal looked happy and relaxed. In a brief speech, he spoke about the first-ever meet of the Indian Mission Congress at Mumbai in October. In the afternoon, the Cardinal took a nap. This was his only concession to his advanced age of 82. When he emerged from his room, he gave an interview.

And what was most striking was his precise way of talking. He was keenly aware that what he said was going to appear in print. So he chose his words with care and accuracy.

As he spoke I recalled the many meetings with the Cardinal in different places: In Kolkata where he had come for a visit. In Bangalore, at the Redemptorist Seminary House on Davis Road. In Puthenpally, his ancestral place, a few years ago. At Archbishop’s House, Ernakulam, sitting behind his large desk. And, astonishingly, his face had remained the same: simple, smiling, unassuming, and humble.

Once, on being asked how he had managed to remain unaffected, despite his supreme position, he said, with a dismissive wave of his hands, “These are all earthly honours and designations.”

And so, remarkably, Cardinal Vithayathil remained the same person, even as his life took stupendous turns. When he was 68, his father predicted he would be an archbishop and he had replied, “It is impossible.” But God did not think so.

Not only did he become an archbishop, he became a Cardinal also, one among a handful in India’s church history after Independence. Sadly, his father -- Justice Joseph Vithayathil -- passed away long before these events took place.

A few months ago, during an interaction, the Cardinal said, with an amazed look on his face, “I have no idea how 80 years have gone past so fast.”

Today, at his passing away, those who have interacted with him will have unforgettable memories. But, most importantly, through the example of his life, Varkey Cardinal Vithayathil has given an invaluable lesson to all of us on how to be a good human being.