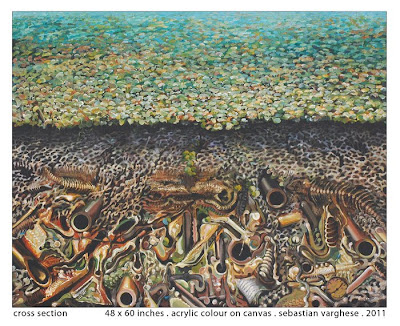 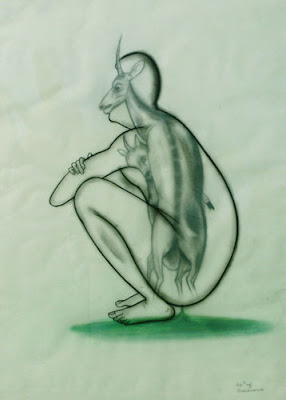 In the noonday heat, painter Sebastian Varghese is perspiring. It is, indeed, a humid day at the David Hall gallery at Fort Kochi where the 'Space Untitled' exhibition is taking place. In Sebastian's painting, 'Cross-section', an acrylic on canvas, on the surface of a lake, there are numerous water hyacinths.

Underneath, you can see pipes, the skeleton of fishes, an old clock, a toothbrush and all sorts of refuse. It seems like a metaphor for society: a bright outer surface masking an inner rot.

“I just wanted to represent the chaos of the city,” says Sebastian, who has exhibited in Texas, California, and Seattle. “The inner landscape of man is in disharmony. This is reflected in the outward decay.”

Another striking painting is 'The Sixth Floor' by O.C. Martin. It is painted with a three-dimensional effect. There is a smooth blue-tiled corridor with drops of blood at the centre. There is a balcony at one end, and corridors on the left and the right.

On the left wall, the letters, 'CCU' can be seen. On the right, it is 'ICU'. There is a palpable sense of apprehension as you imagine yourself walking down the corridor. The blue seems to accentuate the gloom. The balcony is back-lit with fire, indicating the difficulties of life.

“For the past couple of years, I have been in and out of hospital for various reasons,” says Martin. “This painting is part of a series. I want to show that man is suffering from a pervading sense of anxiety. We are all fearful of what is going to happen to us tomorrow.”

About 21 artistes, in varying stages of skill and maturity have displayed their paintings in this exhibition. “This is the first time so many major artistes are exhibiting in one hall,” says Padmini Jai Krishnan, the curator of David Hall. Bejoy Velekkat, a Fort-Kochi based painter, who conceptualised the show, says, “It took me about six months to select, and organise all the artistes.” The exhibition has been arranged by the Thrissur-based Gallery SBM.

And there is a veritable feast for art lovers. One of them is C. Bhagyanath's, 'Secret Dialogue'. A drawing done in charcoal, he has shown two deers copulating inside a man, who is sitting on his haunches. “All human beings have an animal nature within them,” says Bhagyanath. “I was inspired after reading Desmond Morris' book, 'The Human Zoo'.”

Rising talent C.N. Sanam has done a watercolor on the impact of industrialisation in the Vypeen Islands. So he shows how the bridges have connected all the islands, including the Vembanad bridge, the longest railway structure in India. He has drawn new factories and buildings, which have come up, in some parts, while, at the same time, he depicts old structures like a church and trees.

Among the three women painters, T. Rathidevi has done an unusual acrylic painting on canvas. Barack Obama is taking the Presidential oath, his hand on the Bible, but his face is covered by a cloth, like the way the accused in India are, while being taken from jail to the court.

At the bottom of the painting are the following words from the Bible: 'Love thy neighbour as thyself'.

"I just wanted to point a finger at Americans, who rarely love their neighbours,” says Rathidevi. “On the other hand, they target Muslims as terrorists, and have bombed places like Iraq and Afghanistan.” Other works that caught the eye include K. Regunandan’s ‘Three Strangers’, a life-like sculpture, and Rajan M. Krishnan’s acrylic painting, ‘Nest’.

Last, but not the least, is senior artiste Bara Bhaskaran's 'Chronicles', done in pencil. It is a view of Alleppey, lying spread out, seen through the railings of a fort. A man, with straggly hair, appears to be falling from the top of the fort. “He represents Vastu Purusha,” says Bhaskaran. “This is part of a pictorial diary of Kerala, which I have been doing for a Malayalam literary magazine for the past few years.”