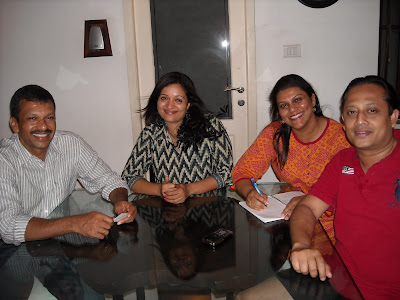 Mid-career professionals discuss the performance of the LDF government, as well as their hopes and aspirations

Anitha P. Emmanuel, a senior manager in a private bank, was taken aback by the demolition of buildings and tourist resorts in Munnar by the government in 2007 because of an alleged encroachment of land. “It was an aimless destruction of so much wealth and capital. As a banker, it affected us because many had taken loans to build these resorts and could not pay it back.”

The Left Democratic Front (LDF) government tried to pay back an impatient public when they recently signed a deal with the Dubai-based Tecom Investments to set up the Smart City project at Kochi. “It is an election gimmick,” says Anitha’s husband, Vinoo Devasia, a businessman. “It took the government four years and 10 months to make a decision.”

Vinoo says that it is not about the buildings coming up or that 30,000 people will gain employment. “There are so many ancillary benefits,” he says. “You need hospitals, shopping complexes, hotels, schools, restaurants, and transport agencies. These developments would have been phenomenal. And it would have benefited so many Malayalis. Why did they not make this decision five years ago?”

The businessman shakes his head and says, “V.S. Achuthanandan was not an effective chief minister. He hardly did anything for the industrial development in the state.”

Meanwhile, Mini Anil Kumar, an assistant divisional manager in the Life Insurance Corporation of India has something positive to say about the government. “The Kudumbasree movement has become a success,” she says. “It is women's empowerment at the grassroots level. This happened, because of the support offered by the LDF government.”

Anitha counters this by saying that the Kudumbasree movement began during an earlier era. “The LDF just carried it forward,” she says. “I don't think it is right for them to take credit.”

Mini's husband, P. Anil Kumar, a seafood exporter says that when it came to the preservation of the forests, the government has an exemplary record. “I have friends who have plots inside forests,” he says. “Forest Minister Benoy Viswam would not give permission to build roads, or spoil the environment. He was very strict about this.”

But the government was clearly not strict about maintaining good roads. “We have suffered a lot because of this,” says Mini. “As a citizen, I want smooth roads, a mosquito-free Kochi city, and good infrastructure.” Vinoo wants industrial development, while Anitha aspires for a corruption-free government. Anil wants less politically-motivated projects.

Asked who will win the upcoming Assembly elections they all agree it will be the United Democratic Front (UDF), but Anil says, “Their image has been dented because of the sex scandal concerning P.K. Kunhalikutty, [Muslim League leader], the jailing of Balakrishna Pillai [Kerala Congress (B) leader], and the many scams that the Congress government at the Centre is embroiled in.”