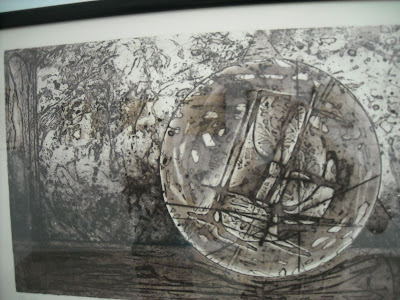 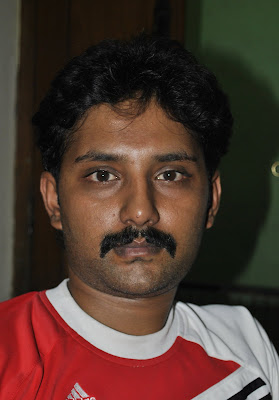 Bangalore-based artist, Rajesh S. Mani, through his etchings and paintings, focuses on the demise of nature in cities and the puzzle of daily life

When Rajesh S. Mani was travelling on a plane from Bangalore to Colombo a few years ago he was struck by the sight of the Premadasa cricket stadium from the air. It was a large circular structure. So when he wanted to do an etching, he made it look like a coin.

“I also incorporated a sword to indicate the battles that takes place between two teams,” says Rajesh, whose etchings and paintings are on display at the Bindhi Art Gallery, Kochi.

In another etching there is an orange-red sun juxtaposed against the dome of a building. This image happened by accident. When Rajesh visited the St. Francis church at Colombo in the evening, he captured the scene with a quickly-taken photograph and reproduced it.

In another drawing, there is an image of a dog, standing on its hind legs, wearing shorts, its tongue sticking out. There is a resemblance to the 'Snoopy' dog of Peanuts fame. “It is a self-portrait,” says Rajesh. Some time ago, he went through drawings he did as a child and came across similar illustrations. “So even though I am 26 now, I decided to replicate it,” he says.

Rajesh's etchings are all of an abstract style: lots of straight and crossed lines, circles and rectangles, with layered textures. In some, there is a two-dimensional effect. But, sometimes, it is difficult to understand what he is trying to say.

“Daily life is a puzzle,” says Rajesh, by way of explanation. “There are many things we cannot understand. It is hard to know what is going to happen in future. That is what I am trying to express with my drawings.”

Incidentally, these etchings are done on a zinc plate. Wax is rubbed on to it. Then, with a needle, a drawing is down. Later, acid is poured onto the wax and it settles into the grooves made by the needle. Soon, the drawing emerges. Rajesh has displayed twenty etchings on various subjects.

His paintings are also on display. “It is acrylic on canvas done in a water colour style,” says Bindhi Rajagopal, the gallery owner. “There is a predominance of nature in the paintings.” Yes, indeed, there are butterflies and birds flying about. There are forests which are deforested in some places.

“The birds and the butterflies are disappearing from my city,” says the Bangalore-based Rajesh. “Gardens are being cut up. New buildings are coming up all the time.” Not surprisingly, there is a painting of a bird which is flying over the mountain, going out of the city to some place else.

Rajesh is the son of well-known painter J.M.S. Mani. Asked what advice his father has given him, he says, “He told me to keep on working. That is the only way I can get better.”