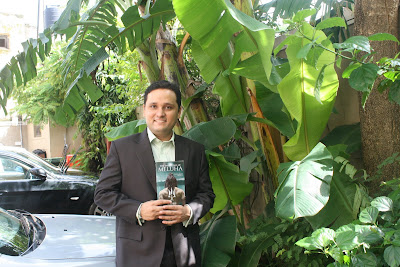 Amish Tripathi's novel, 'The Immortals of Meluha', was rejected by over 20 publishers. Today, it is a nation-wide best-selling novel

One day, Amish Tripathi was watching a TV programme when he came to know that in Persia, angels were known as Ahuras and demons as Daivas. “This was the exact opposite of the Indian belief that evil beings were called Asuras and gods Devas,” he says. “It struck me that the two civilisations could call each other evil.” Everything, he realised, is based on perceptions.

While pondering over this programme, Amish, an avid reader of history for more than 25 years, had a moment of epiphany. “What if Lord Shiva is not a mythological, but an actual historical figure who lived in 1900 BC?” he says. “It is based on the theory that there is a true story behind all our myths.”

So Amish decided to write a book. According to him Shiva is an immigrant from Tibet, who came down to the Indus Valley civilisation in 1900 BC. “The locals called it the Indus Valley, while I have named it Meluha,” he says. “It means the Land of Pure Life.”

But when Amish began writing, very soon he hit writer's block and did not know how to proceed. He is, after all, not a writer by profession. In fact, Amish is the National Head for marketing and product management for IDBI-Federal Life Insurance. During this impasse, his wife, Preeti, gave him a valuable tip.

“Don't think of yourself as a creator,” she said. “These characters already exist in another universe. You have just been given the privilege of entering that world. So, don't try to control your characters. Instead, just observe what they do and record it.”

And that was how, over five-and-a-half years, by writing on weekends, and while commuting to and from work in Mumbai, he was able to complete the 'The Immortals of Meluha'. “The novel is part history, part fiction, and part interpretation of myths,” he says.

The story goes like this: The people of Meluha are oppressed by a tribe called the Chandravanshis, who have allied themselves with a sinister race of deformed humans called the Nagas. “But the Meluhans keep faith in a legend which says that a foreigner, who has a blue throat, will come to their land and become their saviour,” says Amish. They called it the legend of the blue throat or neel kanth. When Shiva, who has a blue throat, comes to Meluha, the people start believing he is their messiah.

“I write of how this simple, tribal boy rose to become a great leader and warrior,” he says. “Shiva is the dude of all Gods. He smokes marijuana, dances brilliantly, and chases a woman he loves. He is charismatic and has a heart of gold. Lord Shiva enables the Meluhans to triumph over evil.”

After the book was finished, Amish began the onerous task of finding a publisher. He sent the manuscript out to more than 20 publishers and all of them sent rejection slips. “The told me it would not sell,” says Amish. “One publisher said no one will read a religious book. Some editors said the story is nice but how do we position it? What genre is it? Is it history, fiction, an adventure-thriller, or philosophy? They did not know how to classify it.” Finally, it was his agent Anuj Bahri who decided to publish the book himself.

Meanwhile, Amish, the marketing whiz kid came up with some innovative ways to bring attention to the book. “We made a live action trailer film on the book,” he says. “Preeti suggested that we put up the first chapter as a free download. Then we printed the first chapter and placed it in leading bookstores all over the country. It got me unprecedented publicity.”

People who read the first chapter came back asking for the book. The stores felt confident and ordered copies. “The net result was that we ran out of the first print within a week,” says Amish. Today, the ‘Immortals of Meluha’ has sold 55,000 copies, and the sales graph is climbing steadily. Meanwhile, Amish is busy writing Part 2 of a planned trilogy. So is Amish becoming an immortal himself?