The legend of O.V. Vijayan 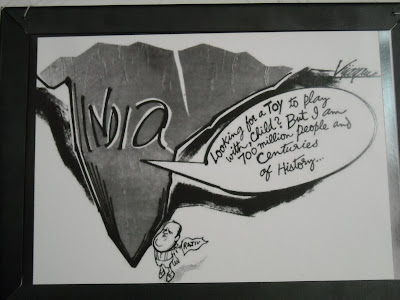 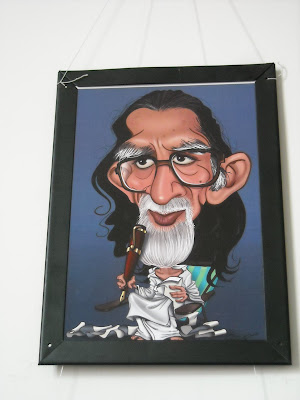 The great writer's cartoons were on display at an exhibition recently, apart from contributions about Vijayan by other artistes

Photos: Cartoon by O.V. Vijayan and depition of Vijayan by a member of the Kerala Cartoon Academy

In an O.V. Vijayan cartoon, hanging on the wall of the Nannappa Art Gallery in Kochi, there is a map of India. Standing near the southern tip is a boyish-looking Prime Minister Rajiv Gandhi. The blurb says, 'Looking for a toy to play with, child? But I am 700 million people and centuries of history.'

In another cartoon, the Russian leader Leonid Brezhnev is standing atop a tank. Behind him, embedded on the mud are placards with the names of 'Afghanistan' and 'Pakistan'. Brezhnev, with arms raised, says, “We are the Soviet East India Company, lady. Looking for an overland route.” The stern-looking lady, is, Prime Minister Indira Gandhi.

Indira Gandhi also features in another cartoon. She is standing on an Indian tank, looking supremely confident, while a morose-looking Badshah Khan, also known as the Frontier Gandhi, is standing next to her. Indira says, “The more we think about the Frontier, the less we think about Gandhi.” She is alluding to the wars against Pakistan.

All these cartoons, around 30 of them, were on display at an exhibition to commemorate the death anniversary of the great writer and cartoonist, who
died on March 30, 2005. It was jointly organised by the Kerala Cartoon Academy (KCA) and the Orthic Creative Group.

“The cartoons reflect the evolution of Vijayan over the years,” says T. Kaladharan, painter and director of the Orthic Group. When Vijayan began working at Shankar's Weekly in New Delhi in 1958, he was influenced by Shankar, who is regarded as the father of political cartooning in India. “But by the time the 1970s came, Vijayan had evolved his own style, with strong lines and stark drawings,” says Kaladharan. The Delhi-based Vijayan did some of his best work for ‘The Statesman’ newspaper in Kolkata.

Asked to describe the attractiveness of Vijayan's cartoons, Sajjive Balakrishnan, the secretary of the KCA, says, “Vijayan used dark humour, sarcasm, and gave prominence to the dialogue. It had a powerful effect. There is a surfeit of cartoon and animation films these days. So, this spare style is very attractive to see.”

Apart from Vijayan's works, there are cartoons of Vijayan by members of the KCA. “These cartoons show the various aspects of Vijayan the man and his books,” says Sajjive. The overall impression that one gets is that he is a solitary person, with a bent towards spirituality. And, of course, everyone has captured him with his familiar black spectacles, straggly beard, shoulder-length hair, and reflective eyes.

Of course, the people who visited the exhibition were those who knew Vijayan or were admirers of his work. “We do not have a culture of viewing cartoons,” says Sajjive. “But the KCA is trying to promote this sensibility. More exhibitions like this will be held in future.”