Come to where the flavours are 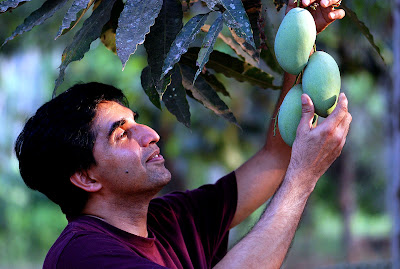 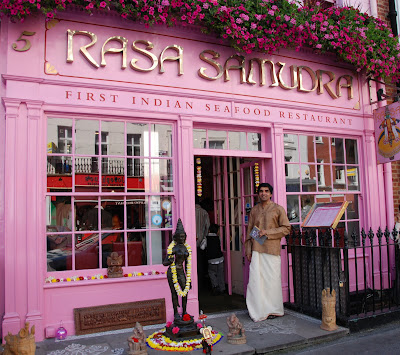 Das Sreedharan’s Rasa group of restaurants has been a hit in London. He talks about the reasons behind the success

Das Sreedharan is sitting on a bench made of strips of wood. Above him is a thatched coconut roof. In the distance is a smooth-flowing river, water slipping over rocks and making a soothing, gurgling sound. Insects buzz about. A bee comes perilously close. On all sides there are plants and large trees. This is Rasa Gurukul, a 25-acre organic farm in Chalakudy, 60 kms from Kochi.

“I grow all types of vegetables here,” says Das, waving his hands around. “There are pumpkins, ginger, turmeric, spices, nutmeg, chillies, black pepper, tamarind, jackfruit, and tapioca. Then we have lots of banana trees.” An assistant brings green coconuts, with white straws sticking out of them. It is soothing juice in the clammy March heat.

This, of course, is a far cry from Das’s life in London where he runs the highly regarded Rasa group of restaurants, 10 of them, in different parts of London. They range in style from Kerala vegetarian food, seafood, meat and lamb, and fast food, which includes rice, chappatis, a curry, vegetables, and a sweet dish placed in a lunch box and sold at 4 pounds each.

“I started my first restaurant at Stoke Newington in 1994,” he says. Within a year, he received rave reviews in newspapers like ‘The New York Times’ and the ‘Sunday Times’ of London, and loads of satisfied customers. As the popularity grew, regulars began putting pressure on him to start new branches.

As Das says, “Suppose you are coming from New York to London. Then you have to travel 45 minutes to reach my restaurant. So, you will tell me, ‘Das, this is too far. Why don't you open something more central?’”

And so, that is how Das started to expand. The name’ Rasa’ means 'taste' in Sanskrit, and every restaurant is painted in a distinctive pink colour. “Pink is associated with love and friendliness,” he says. “It shows the magnanimity and affection of the giver. We want customers to feel our warmth and vibrancy.”

After Das opened the third restaurant he realised that there was a shortage of chefs back home. “Nobody is learning traditional cooking in Kerala,” he says, with a shake of his head. “Cooking for Kerala chefs means Continental, Chinese, Italian, and Mexican dishes.”

That is why he set up a training school where his mother, the definitive influence of his life, till she died in March, last year, taught the youngsters about what good cooking was all about.

Das has an unusual philosophy about cooking. “It is not about how you cook the food, or the right kind of recipes,” he says. “It is about making food with love and care. It is like eating at home. Our mothers make the food with so much of love. To do good cooking, you need to have a spiritual attitude. Then you apply the right techniques. This combination produces magical food.”

One of the most popular dishes is the fish curry with tapioca in it. “However, my signature dish is the mango-banana curry,” says Das. “It is a new discovery of mine: the combination of sweet mangoes and green bananas. It has the cleanest of flavours, and is one of the most beautiful and vibrant of curries.” Of course, all these items have to be eaten along with rice.

Meanwhile, the Rasa restaurants are a magnet for celebrities. Actress Aishwarya Rai has dropped in for a meal. “She looks as beautiful in real life as she is on the screen,” he says. Then there is music maestro, A.R. Rahman and the Indian cricket team.

“Anil Kumble is a close friend,” says Das. “One of the happiest moments in my life was when I had dinner with Anil and the very next day he scored his maiden century.” This was at The Oval, during the third Test against England in 2007. When reporters asked his wife Chetana what was the meal he had eaten the previous night, she said, “Das Sreedharan’s food.”

Das has also received peer admiration. One of London's most well-known chefs, Jamie Oliver, says, “He is a genius. The food is fantastic and inspiring.” In London, Das lives in the same apartment complex where cricketer Sachin Tendulkar has a home. This is a magical leap for a person who spent his childhood in the small farming village of Thrikkariyoor, near the town of Kothamangalam.

Asked for tips for success to youngsters, Das says, simply, “Find your passion and devote your life to it.”