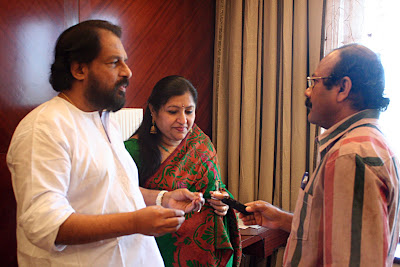 Photo: The author interviewing Yesudas and his wife, Prabha. Pic by Mithun Vinod.

“I cannot feel she is 60,” says K.J. Yesudas. “Age is just a number. God has given me the connection to everybody and specially to my dear wife.” The legendary singer placed an arm around his wife's shoulders in the 16th floor suite of the Holiday Inn, at Kochi.

“Sometimes, Prabha becomes my mother,” says Yesudas. “Sometimes, she is my adviser. In the end, she is everything for me.” But for a singer, the art will always come first, isn't it? “True, the art will come first, so I always say, Prabha is my second wife,” says Yesudas. Prabha counters that by saying, "And we are both devoted to the first wife." Soon, both are convulsed in laughter.

Yes, Prabha Yesudas celebrated her 60th birthday in style yesterday. Her face is unlined, and she wore a rich green saree with a red border and emerald earrings. The clan had gathered together to felicitate her.

So, there were sons Vinod, and Vishal and his wife from the USA, Vijay and Darshana, with their daughter, Ammeya, from Chennai, Vijay's in-laws, S. Balagopal and his wife, Tara, from Dubai, Tara's parents from Thiruvanthapuram, apart from other relatives and close friends.

“This is the biggest celebration for me,” says Prabha. “All the family members and friends gathered together.”

In fact, even as Prabha spoke, calls kept coming on her mobile, from people who wanted to greet her.

Earlier in the day, a teacher and fan, K. Pisharady gave an embossed photo, of Yesudas and Prabha, enclosed in a golden frame, with a poem, which he had written. Here are a couple of lines: 'May Almighty give longevity to you. Your soothing smile has always inspired Dasettan.'

Prabha's daughter-in-law Darshana says, “She is not my mother-in-law, she is my mother. I go to her more than my own mother. She is a person who does not interfere and lets us be. And she is always there, whenever we call her, even at 3 a.m.”

Meanwhile, Yesudas tells his wife he has to go out for some work. Later, downstairs in the lobby, Vijay says, with a smile, “My dad has gone out to buy a surprise gift for my mother.”